Kim Davis is a County Clerk in Kentucky who was recently jailed for refusing to issue marriage licenses to homosexual couples.  Davis refused to issue the licenses based on her religious beliefs.  She claimed that she answered to “God’s law” and eventually demanded that the licenses be issued without her name on them.

Christians all over the country have flocked to support Davis on this issue, with the supposed belief that if she were to issue the licenses she would be supporting sin.

And then there’s the less well known story of Naaman.  You can read Naaman’s story in 2Kings 5, but here’s the short version….. 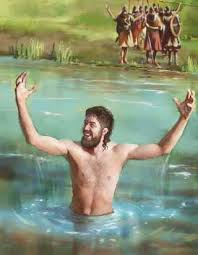 But Naaman had a problem, with his job.

Immediately after Naaman pledges to only serve God, he explains his problem to Elisha….

Part of Naaman’s job in the government of Syria was to facilitate someone else sinning.  Sound familiar?

So what should Naaman do?  Was he commanded to quit his job?

How far does this argument extend to us today?  I don’t know.

But I do know that taking the stance that some Christians today are, that issuing licenses and baking cakes for homosexuals is a sin…..simply doesn’t harmonize with God’s answer to one of his followers in the Bible.

What I wish is that more people would take the stance of “I don’t know”, rather than “I know everything”.  Because like it or not, just like with Naaman, there are some things that man has always dealt with that aren’t as black and white as we’d prefer.

← “It’s For The Kids”….Now Give Me Your Money
“Gun Control” Is An Insult To Our Intelligence →