Do you remember playing backyard football as a kid?  There were never quite enough people to make up two full teams, so somebody was designated as the “All-Time Quarterback”.  He’d throw for both teams, hustle the entire game and never really got a break.

Once you become a dad of fishing age children, that’s what you become….The All-Time Quarterback.

Fathers of fishing-age children quickly realize that they’ll never do any real fishing of their own ever again.  And the more kids you have, the more “all time” you become.  With three fishing-age boys of my own I know all too well how much work it takes to keep three hooks baited, three fish unhooked, three lines untangled, and three kids out of the water.

My boys are a bit older now and so there’s far fewer hooks to be baited and nearly all the fish are unhooked without my help but logistically, orchestrating a fishing trip for three kids really eliminates any chances of fishing for dad.

Lest you think that I’m complaining, let me clarify….  I don’t care if I ever fish again.  It’s not that I don’t enjoy fishing, it’s just that I’m perfectly content to be the all-time quarterback for the rest of my days.

I was able to take my family back to my childhood stomping grounds last week.  I brought my boys to the same pond I fished when I was their age.  I can still remember the first time I fished that pond as a kid.  It was a warm summer afternoon and Nelson, the old man who owned the property, sat with me on a pair of rocks near the shore that seemed ideally suited to sitting for an old man and a boy.  I don’t know exactly how old Nelson was at the time, but in my ten year old eyes he was a giant of a man.  Nelson was cut from different cloth than the modern outdoorsmen.  A product of the Great Depression and World War 2 and raised dirt-floor poor in East Texas he spent his retirement years riding a four-wheeler nearly everywhere he went, except for the rare times that he had to take his truck, a truck with a bosomy-lady-with-wings hood ornament that was the envy of every young man in town.  As far as I know that truck didn’t even have windows, as every time I saw it they were down with a rifle or two in the passenger seat.

Nelson hunted, trapped and fished all year, with little regard for seasons or bag limits.  “Sportsmen” of today who enjoy reading magazine articles on wildlife management and whose boat trailers match their trucks will scoff at Nelson’s methods, and I suppose rightly so.  But to a ten year old boy Nelson was a living legend.  He was the man every Game Warden wanted to catch and the man every boy wanted to be.  He was a last remnant of a different time and I was lucky to have known him. 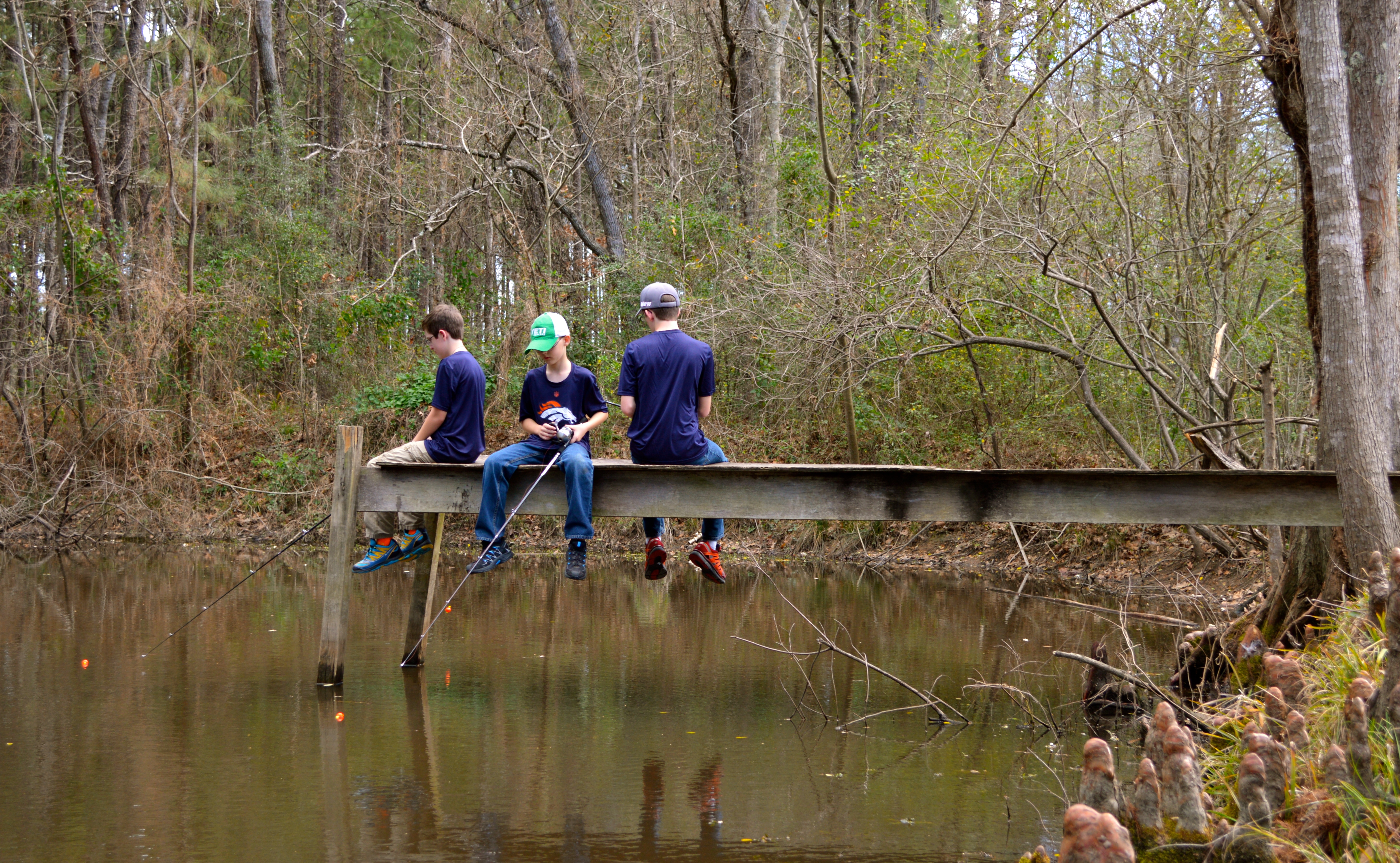 And so last week, 25 years after that first time Nelson took me fishing in his pond, I brought my boys back.  I could still hear his stories as I watched my boys reliving my childhood right before my eyes.  The dock, rickety in my day and downright dangerous now, had the same hollow sound as they tromped back and forth for fresh worms.  The fish were in all the same spots, biting just as well as they had before, they sounded the same when they were tossed back in and the bobbers looked the same dipping and then diving under the brown water.  I put a line in the water for old times’ sake and to taunt the boys with threats of “the big one” I was about to bring in, but luckily never got a bite that I noticed.  I think actually catching a fish would have ruined the experience for me.

We had to leave the pond for lunch and then spent the afternoon fishing the same cove on Sam Rayburn that I fished with my dad when I was their age.  I couldn’t help but wonder if this afternoon, this one afternoon out of the thousands of afternoons they’ll spend with me before they’re grown, will be an afternoon fishing trip that they’ll remember in twenty five years.  You never know what it is that prompts you to remember one particular event from your childhood, but I’d like to think that days like this are what will keep them centered as they grow.

If not the other two, I’m at least fairly certain that my oldest will remember this trip as the trip that he caught “the big one”.  I was standing next to him, taking advantage of a rare chance to bump a plastic worm through the water when he set the hook.  Before I could look over to see the bend in his pole I heard the ZZZZZZZZzzzzzZZZZZZzzzzz of his drag and him say, “Uh, Daddy…..I think I’ve got one.”  I’m not sure he bothered to breathe until the fish was in hand, but when it was he was all smiles.  He couldn’t wait to tell all of his uncles, who were fishing at another spot and who he was convinced hadn’t managed to land anything THIS big.  They all gave very flattering estimates on its weight and appropriate grunts as they hefted it up later to take a look at it.  You can’t help but appreciate a thirteen year old’s version of the big catch….”You know how when you have to puke and you bend straight over?  THAT’S how far over my pole was bent with this thing!”

As a kid I never understood how someone could be a hunting or fishing guide.  How could you possibly stand to just watch everybody else have all the fun?  Honestly, I’m still not sure I’d enjoy watching strangers catch all the fish or shoot the biggest buck.  But I can tell you that when you love the people doing all the catching and hunting, there’s no greater sound than stomping feet on a rickety old dock or the ZZZZZZzzzzzzzZZZZZZZ of line being pulled from a reel that’s not yours.

Nelson is long gone now.  I wish he would’ve been there to see my boys on that dock, my wife kicked back on the grass in the shade and to tell me another story.  I’m quite certain that I could never fill Nelson’s boots, but I’ll gladly settle for filling his role of “All-Time Quarterback”.  I’ll sit on a rock and tell stories while my kids fish and never regret a minute of it.

Because just like backyard football….When you’re the All-Time Quarterback, you always win.

← The 3 Kinds Of Imperfect People
Facing our problems philosophically →

5 Comments on “The All-Time Quarterback”