Dear Christians, whether you want to admit it or not…the transgender bathroom issue is complicated.

But neither of those beliefs lead us to a clear-cut answer to how we should deal with the current transgender bathroom issue.

It’s an obvious fact that we live in a fallen world.  Mans’ depravity and desire for sin seems to be unending.  And it’s a Christian’s job to teach against the sin that we see in the world and try to influence people to seek God’s will for their lives.

But the fact that God placed us in a fallen world is evidence enough for me that He intended Christians to be able to deal with the world as it is, not just how we think it should be.

That’s why, when faced with the transgender bathroom issue, preaching against transgender-ism isn’t enough.  When faced with a fallen and depraved world it’s not enough for us to shout from the rooftops, “The world shouldn’t be this way!”  Rather, I believe we should be shouting, “The world shouldn’t be this way….but since it is, this is how I’m going to deal with it!”

But on the issue of transgender bathrooms, we’re not admitting the truth….that the issue really is more complicated that we like to think.

Let’s take North Carolina’s bathroom law as an example…..
In an attempt to keep transgender people out of the “wrong” bathroom North Carolina’s law states that Public agencies shall require every multiple occupancy bathroom or changing facility to be designated for and only used by persons based on their biological sex.

So it’s one thing to say “Susan is wrong” but it’s quite another to actually come up with a solution for which bathroom Susan should use.

Because if Susan obeys North Carolina’s law you’ll have a person in men’s clothing, with facial hair and a penis and a gruff voice who is attracted to women in the women’s bathroom.

The new law in North Carolina has the potential to cause the very problem that it seeks to prevent.

It’s about time for Christians to learn to say, “It’s complicated.”  Because it is.

Simply saying that being transgender is wrong doesn’t solve the practical problems we’re facing.  Claiming that suddenly our wives and daughters are in grave danger isn’t a sound argument when the laws we’re passing are creating the very danger we’re seeking to avoid.

I don’t know what the best solution looks like.  I know it doesn’t look like North Carolina’s law.  I know that a boycott by some doesn’t solve the problem for the rest. 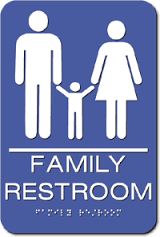 I’d imagine that the solution looks something like single-stall bathrooms for people who want to use them.  In fact, that’s the solution we’ve been using for quite a while now.

Nearly every large store (like Target, for example) has a “family restroom”.  Why is that?  It’s because father’s didn’t want their daughters in a bathroom with an exposed penis.  So if Dad is out with his young daughter he can take her to the family restroom and know that she’s safe.  When a mother is out with her son and needs to accompany him to the bathroom they can use the family bathroom to help avoid making other women uncomfortable.

The questions of “Should there be a penis in this bathroom?” or “Should my daughter be around those people in a bathroom?” have been around for years.  And we’ve already solved the problem.

So why are we acting like the sky is falling when confronted with a problem that we’ve already found a solution to?

I’d imagine the response will be something like Because I don’t like the LGBT agenda being forced on me.  And that’s great.  Do something about it.  Shout your beliefs from the rooftops.

But in the meantime, until everyone has become a Christian, work to find solutions on how a Christian can navigate this sin-sick world.  And when we’re looking for that solution, sometimes it’s OK to say, “It’s complicated.”

← Find Your Tribe
When Trump Calms Down →

One Comment on “Dear Christians, the bathroom issue is complicated.”