What if you had to carry your free speech in your pocket? 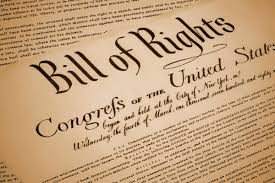 What if your free speech, all of those ideas and opinions that our founding fathers guaranteed you the right to proudly proclaim, what if that free speech had to be carried in your pocket rather than your heart?

Right now a private business can restrict your freedom of speech.  If you use the N-Word in a flower shop owned by a black woman, she can make you leave.  If you want to tell the world about the virtues of Nazi concentration camps in a Jewish bakery, they can make you leave.

A private business can restrict your freedom of speech because as soon as you leave, at the very moment that your ignorant, racist, anti-semitic feet land on dirt in the public domain….you can start spewing your filth again.

The same thing goes with other rights as well….

But the guarantee that Americans can keep and bear firearms is different from these other rights.

That second amendment right is different from the first because you can’t store up pistol in your heart and keep it to yourself until you’re back in a “gun allowed zone”.  You can’t just step off of private property and begin carrying a firearm that you didn’t have in your possession moments earlier.

The second amendment guarantees that Americans will be able to physically possess an object.  So prohibiting an American from possessing that object in one location often means that they can’t possess the object before or after visiting that location as well.

What if our freedom of speech was an object that we carried with us?  Would we stand for an institution telling us we couldn’t possess our free speech on their property….If that meant that we also couldn’t carry it around before or after visiting that institution?

What institutions do this?  What sort of organization has the power to not only control what you do while on their property, but because of the mechanical nature of the second amendment are also able to restrict your rights before and after visiting them?

Perhaps the most offensive part of all of this is that the institutions that are the greatest offenders in this regard are government institutions.

Schools.  Possessing firearms on school grounds in many cases is verboten, regardless of the fact that you may just be making a stop there as a part of other daily business you’re conducting.

And not only are you restricted from exercising your right while viewing the document that guarantees that very right….the federal government, intentionally or inadvertently, has devised a method of also prohibiting you from exercising that right before and after entering their museum.

I contacted the National Archives Museum in anticipation of a visit to view their “Record Of Rights” exhibit, which is home to the Constitution, Declaration Of Independence and Bill Of Rights….
ImAGiver-I have a concealed handgun for my family’s protection and the documentation necessary to carry it.
National Archives-We don’t do weapons.

ImAGiver-I don’t need you to do anything with it.  Can I carry it inside after providing you with documentation that I’m legally carrying it?
National Archives-We don’t do weapons.

ImAGiver-OK, do you have a locker I can secure it in before entering the building?
National Archives-No.  We don’t do anything with weapons.

ImAGiver-If I can’t carry it inside, then I’ll need to put it somewhere.
National Archives-We don’t have lockers.

ImAGiver-OK, I’m sure there’s a lock on your office door.  Can I just keep it there?
National Archives-Ummmmm, no.

ImAGiver-If I can’t carry it inside, and you won’t let me put it anywhere, what do you propose as a solution?
National Archives-You can go back to one of those other museums and rent a locker and come back.

ImAGiver-Lock a pistol up at another museum and just leave it there, then come back here for a while?
National Archives-We don’t do weapons.

Not only does the federal government prohibit the exercising of a right while on their property, their method of enforcing that law also prohibits the exercise of that right before and after your visit to their property.  And again, that’s the property which houses the very document that guarantees Americans the right which is so often restricted.

Of course not.  America would be filling the streets with pitchforks and flaming torches if a school told them to not practice their religion at any time during the day, if any of their errands involved visiting their kids at school.

We, myself included, have long advocated that the second amendment is no different from any of the other rights guaranteed to us.  But that’s wrong.  The 2nd is different.  It’s different because of its mechanical nature.  It guarantees something independent of ourselves.

But that difference doesn’t mean that it can be restricted more.  On the contrary, that mechanical difference between the 2nd Amendment and all the others should be the factor that makes it all the more difficult to restrict.

If an organization decides to restrict our 2nd Amendment right, it should be incumbent on that organization to at least provide a means for guaranteeing our ability to exercise that right immediately after leaving their purview.

← Why do your kids argue?
Dogs are easier to love than people. →

2 Comments on “What if you had to carry your free speech in your pocket?”