Don’t laugh.  This is an important subject that receives far, far too little attention in today’s society.  Prepare to be educated.

It’s become painfully obvious to me that somewhere along the way the topic of urinal etiquette simply isn’t being taught to our young men anymore.  Maybe it’s a result of so many boys being raised by single mothers, who naturally have never been exposed to these important life lessons.  Or maybe in today’s upside down world of transgenderisticity too many people believe that there aren’t any black and white rules to abide by at a row of urinals.

Regardless of the reasons for urinal ignorance, it’s time to put a stop to this nonsense.

When you enter the restroom your first decision is likely based on Rule #1.  Which urinal do I approach?  Just remember…..Nobody likes being crowded.  It’s not about being close to some other guy’s man parts.  But let’s get gross for a minute.  I wear shorts about 10 months out of the year.  And depending on the strength of your stream, the shape of the urinal, your aiming ability and the force of the urinal’s flush I might very well get some splash back all over my lower legs.

If there are only one or two urinals, the decision is already made for you.  The potential for splash back is the same no matter what you choose.

If there are three, you’ve gotta start making smart decisions. 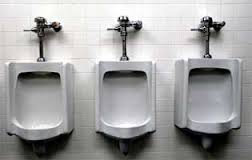 If you insist on not standing next to someone at a urinal then take your chances on whatever might be waiting for you in a stall’s toilet.  Good luck with that.  But don’t hold up the line.

If there are multiple urinals your choices get trickier as people enter and leave.  Just remember….Crowding creates splash back.  And nobody wants that.

For instance, with five urinals you can still fill in from either end.

It’s worth mentioning that some venues are still using the urinal trough.  The same rules still apply, except that it’s not clear exactly how many people are supposed to be at the trough at once.

Rule #2-Don’t Use The Short One 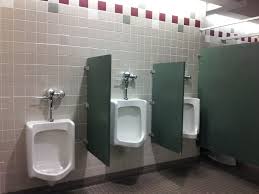 As the father of three boys I’m never not amazed at the complete disregard for urinal etiquette I see when it comes to the short urinal.

Let’s be clear…..  The short urinal is for short people.

Full stop.  End of story.  That’s all she wrote.  Unless you’re a child or midget, don’t use the short urinal.

Ideally when a father brings his boys to the bathroom they are able to occupy the short urinal and the one directly next to it.  That way the kid can pee and the dad can create a buffer against potential creeps.  If my kid is at the short urinal and you jump in and take the one right next to him, I will take the next urinal over.  But I will stare directly into your eyes as I pee to make sure you’re not looking at my kid.  So unless you want me peering into your soul while we both have our pants down, don’t use the urinal next to the short one.

The urinal next to the short urinal is for fathers and creeps.  So unless you’re one of those, it’s off limits.

Rule #3-When To Speak

There’s nothing wrong with having a conversation in the bathroom.  But there are certainly ways to make that communication weird.

Rule #4-Don’t Ever, EVER, Use Your Phone 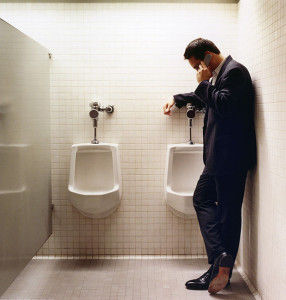 I understand that you desperately need to update your status and see how many people liked your selfie from lunch today.  But as a father, I don’t know if you’re playing Words With Friends or taking pictures of my kids.

So I’m going to check.  I’ll lean over your shoulder and see what’s going on, or stand directly in front of you until my kids are done.  I’ve done it before and I’ll do it again.

And to be clear, when I’ve invaded the personal space of a guy using a smart phone IN A PUBLIC BATHROOM, I’m not the weird one.

If you keep your phone in your pocket, the odds of it getting thrown across the bathroom and stomped into a hundred pieces go down significantly.  Just saying.

I hope that these four simple rules will enhance your urinal use experiences.

If you’re a single mother trying to raise boys on your own, take these lessons to heart and teach them to your boys.  Find an empty bathroom and walk them through the process of urinal selection.  (A “dry run”, as it were.)  They’ll thank you for it in the long run.

If you’re a father or grandfather, make sure your boys know about splash back now.  That’s a lesson that’s better learned from your experience than their own.

And if you’re just a weird, creepy guy in a  public bathroom who chooses to ignore these rules…..Just know that we’re watching you.  And we’ll stomp your phone into a million little pieces if we need to.

← Monday Funday–And that’s when my wife stopped breathing….
Dear Mr. President, I know where you can find your god. →