There’s a gun violence story that the media isn’t reporting on, but I’ll tell you about it.

All that damage, all that destruction, a community destroyed and lives ruined…All by peaceful protestors.

So where is the gun violence story

that’s not being reported? 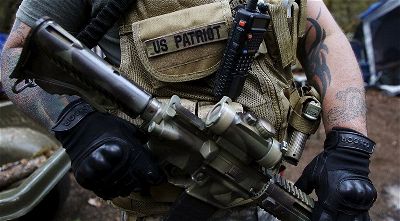 This week in Oregon protestors have taken over a Federal building and are saying that they might occupy it for years to come.  The protestors in Oregon are armed and openly carrying their firearms.  In fact, they’ve been outright labeled as militia members by the media.

So why isn’t the media reporting on the gun violence in Oregon?  Because it hasn’t happened.

The peaceful, unarmed protestors in Ferguson managed to destroy and steal millions of dollars worth of property.

But the armed “militia” members in Oregon have done the unprecedented.  Gun toting citizens have taken control of a Federal building without any violence.  No buildings or cars have been set on fire and no one has been injured.

Apparently “assault rifles” are safer for Oregon than “peaceful protesters” were for Ferguson.  And that’s the gun violence story that the media won’t report.

← Imperfect Solutions
Should we “go to church” without emotion? →