The audacity of the Vanderbilt Women’s Center

Next week the Vanderbilt Women’s Center will be hosting a lecture series on “Healthy Masculinites”….AKA “A study in absurdity and arrogance”. 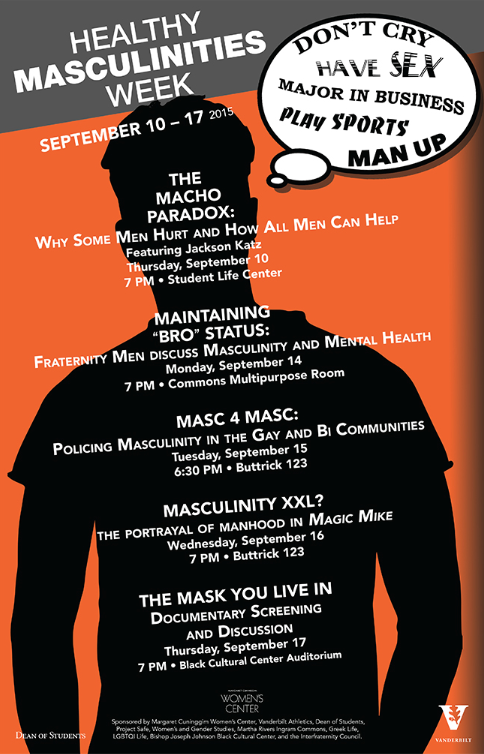 Now I’m not going to go on a knuckle dragging rant about what “real men” are.  I have a friend who’s never hunted and killed his own supper in his life, but I admire what a wonderful father and husband he is.  And I know guys who can “skin a buck and run a trotline”, who are genuinely awful at being a person, much less what I consider to be a real man.

But what I see as a common trait amongst all men, and what may eventually be the downfall of modern masculinity, is a man’s tendency to just not care about stuff.

For example, the very idea that a “how to be a better woman” seminar would be held by a “men’s center” would generate instant outrage in our country.  Actually, no it wouldn’t.  Because you’d have too hard of a time to find a “men’s center” to host it in and it would never happen.

But there’s no outrage.  The men who’ve heard about it haven’t given it more thought than an eye roll and shoulder shrug. (Maybe because making this country great seems to get in the way of being a full time activist.)  Well lucky for my readers, I’m an aspiring full time activist (what a sweet gig that would be!) so I’m going to actually twist off about this.

Here we are in 2015 and if anybody can be any gender they want, why shouldn’t a group of women choose the speakers for a “how to be a man” conference?

The hypocrisy of the whole thing is what outrages me.

And none of that is true.  What the MCWC meant to say is “We want the world to conform to how we think it should be”.

That’s what any organization means when they say “social change”.  When you see that just read “conform to the way I think things should be”.

A core value of progress toward gender equality doesn’t comport with celebrating the unique differences among all persons.  If we’re all so different, and if I’m supposed to celebrate the ways that I’m different from everyone else…..Why is the MCWC working so hard to make sure that everyone is equal?

If everyone is empowered to have a voice and find an opportunity to belong, where do I……the middle age-middle income American father and husband who believes that homosexuality is a sin, a wife should be in submission to her husband and that the real racism in this country can be seen in the Black Lives Matter movement……where do I belong?

I know where the MCWC thinks I belong, and that’s at their seminar learning to be the kind of man that they think I should be.

I’ll skip the seminar next week and skip right to their answer right now…..No.  A man shouldn’t feel compelled to do those things.  A man should feel free to act like……well, exactly how the members of the MCWC would act.  That is, after all, the healthiest way to act.

This new-fangled idea of manhood being a slightly hairier version of womanhood offends me to the core.  God created men and women to be different, to act differently, and to fill different roles in their relationships and society.  To deny this not only denies the natural order of the world, it is a slap in the face to our Creator.

← Monday Funday–My Trip To The STD Clinic
Is Every Bad Idea A Sin? →