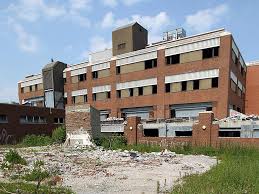 I unknowingly had to deal with a customer at work who had Tuberculosis, so my boss sent me to the local clinic to get checked out.  Unfortunately, the TB testing clinic was also the community STD clinic.

The clinic was downtown in a nearby large city.  Not the swanky, hip part of downtown of course.  It was part of downtown where hobos sleep on the sidewalk and carnivorous squirrels lurk in the shadows (I’m not kidding about the squirrels).

As I pulled into the parking lot I couldn’t tell from the broken down signs if I was supposed to enter the high rise full of broken windows from a zombie movie or the tiny, dilapidated cinder block shack across the street.  I figured I was less likely to fall through the floor to my death in the shack, so I tried that building first.

As I walked in the front door I entered a tiny lobby that was a bit smaller than a my closet at home and was greeted by a wary receptionist behind what I can only imagine was bullet proof glass.  Taped to the glass were two signs with arrows pointing to the right and left, each containing lists of possible venereal diseases and which way you should turn-depending on what you had contracted.  I scanned each list and since I wasn’t suffering from any of the various discharge related illnesses that were listed, I asked the kind lady behind the thick glass to direct me to the TB testing building (secretly praying it wasn’t the zombie building next door).

“Oh, you’ll go the left.  All the men go to the left.  The ‘ladies’ (she said it with a tone that expressed her disdain for the misuse of the word) all go to the right.”

“Yes, but because of budget cuts the TB testing and STD testing are all done by the same lab.  Just have a seat to the left and someone will be with you shortly.”

As I’m pondering the veracity of the idea of a “lab” being housed in this building the lady smiled and buzzed me into the waiting room.  Yes, she had to unlock the door for me to enter the waiting room for the STD clinic.  Who on Earth tries to break into the lobby of an STD clinic?

I took one step into the waiting room and immediately regretted it.  I’m not making this up.  The fluorescent lights, the lights that were working anyway, were in a constant state of flicker.  Can you imagine a hospital room in a postapocalyptic zombie infested country that was a 3rd world wasteland before the zombie outbreak?  Where a dirty old doctor with questionable motives, stringy hair and one good eye performs amputations for fun and profit?  That’s what the waiting room looked like.

I took a seat on the least greasy looking chair, as far away from the only other occupant of the room as possible.  The other occupant was a very odorous man of about 50 years who coughed the entire time I was in the waiting room.  Not just a little “oh my allergies are acting up…this pollen is crazy isn’t it?” kind of cough.  No, a “I’ve got a serious disease of the lungs and just might cough one up with all of this blood” kind of cough.  Which I found exceedingly ironic, considering that I was there because my boss DIDN’T want me to have TB.

After what seemed like an eternity a clerk (I’m hesitant to use the word “nurse” for obvious reasons) called me back and directed me to another waiting room.  The next waiting room was much cleaner and I was happy to find it empty and to be alone with my thoughts.  After settling in I took in my new surroundings and found the walls covered in posters.  Not motivational posters with inspiring sunsets or mountain peaks, not funny or heartwarming posters with little kittens hanging onto clothes lines (“hang in there!!!”).  No, these were posters ALL about gay sex.

Great, thinks I.  Of course the STD clinic is doing a public relations campaign to encourage gay sex.  Job security and all that.

After a few minutes I was joined by another patient.  He kicked back like he was familiar with the place and after fidgeting around for a minute got up to turn on the TV.

I hadn’t noticed the TV before and thought a little mid-day Jerry Springer could really just drive home the whole experience for me.  Except that the TV didn’t actually have any service.  It wasn’t hooked up to cable or satellite or even local stations.  It was just playing a perpetual loop of what I can only guess was a after-school-special-esque mini-drama for gay people.  As soon as the screen came into focus there were two dudes kissing.  Not gentle, affectionate kisses (although that might have been even weirder for me), but serious heatofthemoment kind of kissing.

My fellow patient took one look at the screen and shouted, “Oh #@&* no!!!!” and flipped the TV back off.  Then remembering that I was in the room and supposing that I was there for STD testing like he was he looked at me sheepishly and said, “I mean, unless, you know, if you wanted to watch that…..”

STD Patient-“Cuz that’s cool man.  I mean, whatever, you know….I’m not saying……”

So it was that after the TV was turned off my new friend decided that we should learn more about each other.

STD Patient-You know, this is crazy….right?  Just when you think you know somebody.

STD Patient-You know….Just when you think you know somebody, they go and do THIS to you (looking around the room).

STD Patient-(Laughing at me big two syllable word) Yeah man, that’s what I’m sayin’.  I mean, I’ve knowed that gurl for years man.  And I didn’t ever know anything like THIS would happen.  You know what I’m sayin’?  The least she could do was tell me?  Ya know?

Me-No.  Not really.  (I then realize that STD Patient thinks I’m at the clinic for STD testing)

Me-(Thinking back to my brief encounter with a TB infected customer)  I just don’t know what you mean.  I’m not even sure who sent me here.

Me-Yeah.  I mean, I was only around for a few minutes.  That’s all it took to get exposed.

STD Patient-OOOOOOOOOOHHHHHHHH YEEEEEEAAAAAAAAHHHHHHH.  THAT’s what I’M talking about!!!!!  That’s my boy!!!!!  (Our friendship had suddenly reached a familial level)

He reached out to give me some sort of ghetto-fabulous high five which was interrupted by the entrance into the waiting room of another patient.  (And thank goodness, because there was NO WAY I was touching that guy.  You’d think that touching other people at the STD clinic would be generally accepted as a no-go, but evidently not.)

The new patient took a seat nearby, crossed her arms and kept her eyes planted squarely on the floor.  Yes, I said her eyes.  Somehow the portion of the building for those with indoor plumbing infections reached peak capacity and this poor girl had to venture into our side of the building.

Now it was pretty obvious, to me at least, that the girl just wanted to be left alone.  But not to my new friend.

I watched in astonished horror as he sized up his prey.  “Surely not”, I thought.  “Surely he won’t”.  And then he did.

My new friend tried to pick up a girl in the STD clinic.

Now, as if that weren’t disturbing enough, it rattled me to my core that he used the same line on her that he had used on me……

“This is crazy huh?……  Just when you think you know somebody…..Am I right?”

I had spent the last hour praying to the good Lord in Heaven to get me out of that clinic.  But now, just as things were getting not just good, but awesome….another clerk came in to call me away.

“Mr. I’mAGiver.  You can come back for bloodwork now.”

Imagine that you’re standing on the side of the road watching two freight trains about to collide at 100mph.  You don’t necessarily want it to happen, but you can’t help but want to see what it’s going to look like when it does.  Then imagine that just as the trains are about to collide into a fiery explosion someone taps you on the shoulder and you miss the whole thing.  That’s how I felt when the clerk called my name.

As I walked out of the room I paused by my new friends chair and whispered, “Good luck.”

“Yeah….(looking back at the girl who was sitting only a few feet away and listening to everything we said)….You know that’s right.”

I walked into the actual nurse’s office and sat down in the chair.  Turning to me, the nurse startled and flinched when she saw me.  “I’m sorry.  I just, uh, well, you’re just not the normal type of patient we see here.”

“You mean because I’m clean, or have combed my hair, or I’m completely dressed, or…..”

After the bloodwork was complete I was escorted back out of the building and took a deep, refreshing breath of air wafting over from the zombie building next door, which suddenly didn’t seem so scary after what I had just been through.

I felt like a survivor.  Like I had conquered something unconquerable by making it back out of the building.  The sky I could see through the limbs of a nearby dead tree seemed bluer.  The grass growing up from the cracks in the parking lot seemed greener.

I thought I was ready for anything.  And I was wrong.

Walking back to my car I saw a squirrel near the sidewalk, who didn’t seem too scared as I approached.  “There’s a sign of good fortune”, I told myself.  “A slightly emaciated squirrel is going to let me get close to it.  Maybe I could……Whoa Nelly!!!!  What does that squirrel have in it’s mouth?!?!?”

It turns out that the squirrel wasn’t actually letting me get close to it.  The squirrel just couldn’t get away very fast BECAUSE IT HAD A DEAD BIRD IN IT’S MOUTH.  Folks, that’s the God’s Honest Truth.  If I’m lying I’m dying.

I didn’t know what to do.  My consciousness was shocked back into perspective.  This was no place to revel in the beauty of God’s creation.  This place was evil!

I literally ran back to my car, locked myself in it and sped away….checking my rearview mirror for any squirrels that might be following me.

(I found out later that when malnourished, many squirrels and other herbivores will eat meat to supplement their diet.  It’s either that, or the squirrel was a zombie.  I don’t know.)

I called my wife on the way home and had her lock the kids away in their room.  She convinced me to not burn all of my clothes, but I did strip down in the garage and then immediately scalded myself clean in the shower.

In case you were wondering, I didn’t have TB after all.  But I did make a new friend, so the trip was definitely worth it.