Apparently the blind really can lead the blind 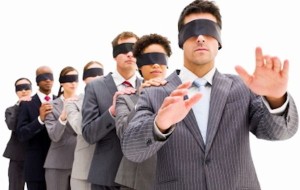 This is hands down one of the most interesting stories I’ve heard in a long time.  A blind man, Daniel Kish, has learned to echolocate his way around the world, much like bats and dolphins, by making clicking sounds.  What he can do, and what he has taught scientists, will amaze you.

Daniel Kish’s eyes were removed as an infant because of cancer.  As he grew Daniel intuitively started clicking, and learning to navigate himself through life with those clicks.  As a child Daniel rode a bike, climbed trees, made his own meals and walked himself to school.  Today Daniel in the president of a non-profit that he founded, World Access For The Blind, and he works to teach others how to use echolocation to “see” without vision.

Because scientists are starting to understand that Daniel is actually seeing what’s around him.

A German neuroscientist experimented with Daniel and other blind people who are able to echolocate, trying to discover exactly what they SEE when they click.

So for the experiment little microphones were placed in Daniel’s ears to record exactly what he heard as he clicked, then he was given a series of objects to “look” at.  Daniel “looked” at a car and a lamppost and a salad bowl.  And the scientists even attached the salad bowl to a fishing pole and swung it around in front of the test subjects to see if they could determine that it was in motion in front of them.

Then they played the recordings back for Daniel and he was able to tell, based on the recordings of his clicks, which object had been in front of him for that recording.

Next the scientists put the subjects in an MRI machine and played their clicking recordings for them….and discovered that the visual cortex, the part of the brain that “sees”, was reacting the exact same way for the blind subjects listening to their clicks as it did for people with vision when they looked at the actual objects.

The blind subjects’ brains were “seeing” the objects.  Just not the same way that we see them.

The parts of the brain that “see” color and texture obviously weren’t activated, as the blind subjects like Daniel (who had never had vision) didn’t have the same concept of color or texture as we do.  But they did “see” things.  Daniel explains that although he doesn’t “see” the salad bowl in the same way that we do, he recognizes that there is a 3-dimensional object in front of him and can tell what it is.

In fact, one echolocater who became blind at the age of 14 said that after learning  to echolocate…..he would describe what he’s doing as “seeing”.  Blurry, and without color, but vision nonetheless.

Scientists believe that the best way to describe it would be to think of your peripheral vision.

One of the most moving things about Daniel’s interview was the notion that blind people aren’t limited as much by their visual impairment, but more so by the way OTHER people see them.  When blind children are told about all the things they can’t do, they never try to learn to do anything.  When we’re convinced of all the things that blind adults can’t do we build our assistance programs to fill a need that WE perceive, rather than what is actually needed.

Daniel’s mother let her blind child ride a bike in the street, walk himself to school, cook and climb trees.  And with her support, he learned to live a life that is more active than many of his non-blind peers.

I think there’s certainly a lesson there for parents.  Our children will only grow into the people we expect them to be.  If we decide that our kids can’t do this or won’t accomplish that, those things will become self-fulfilling prophecies.

The saddest part of the story about Daniel were the interviews with people who instinctively began to echolocate as children, but their parents discouraged it because walking around clicking all of the time just isn’t “socially acceptable”.

Parents who didn’t want their kids to be “weird” (or maybe they didn’t want to be the parents of a “weird kid”), so they deprived them of their natural ability to “see” even when they were blind.

At some point our children will be bound by their intelligence, their personalities, their physical abilities…..we don’t need to burden them even more with our lack of confidence in them.

You can read the entire interview with Daniel and about the science behind echolocation here or listen to the radio broadcast here.