Monday Funday….Kramer’s Cologne Can Be Concocted!

It’s finally possible because scientists have unlocked the secret of why the beach…smells like the beach.

Totally useless information for your Monday….

The ocean is full of phytoplankton, microscopic organisms that create their life’s energy by absorbing sunshine.  For reasons that aren’t completely understood (some scientists believe that it may be a form of microscopic sunscreen) phytoplankton also produce dimethylsulfoniopropionate.  But as with all of God’s creatures, phytoplankton die.

For those of us raised on the carcinogenic coast of Texas, it’ll come as no surprise that the ocean is also full of bacteria.  And when phytoplankton die they’re eaten by the oceanic bacteria.

Random useless knowledge for you…. 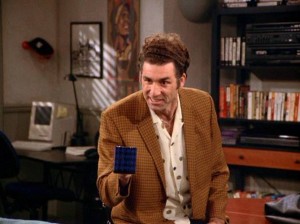 So yes, Kramer has been vindicated.  As you’ll remember from Seinfeld, Kramer wanted his cologne to smell like the beach but Calvin Klein stole his idea and named it “Ocean”.  Well, based on satellite images of dimethyl sulfide clouds we now know that the smell of the beach isn’t the same as the smell of the ocean….and Calvin Klein picked the wrong name for their stolen aroma.