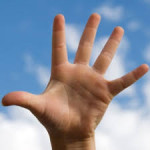 I realized this week, while listening to a sermon posted to Facebook, how much I’ve come to cringe when I hear the “5 Steps Of Salvation”.

If you’re not familiar, there’s a popular method of converting sinners that involves teaching them the five simple steps they must follow to “be saved”.  I’m not saying that I disagree with any of the five steps.  I think they are necessary.  I believe (obviously) that you must hear the word of God before you can obey Him.  Once you hear the word, you would naturally have to believe it before you would bother to obey it.  And if you’re going to turn your life over to God, you have to repent (make up your mind to put your faith in God rather than yourself or this world).  After deciding that you’re going to put your faith in God, I believe that the Bible teaches that we should proclaim that belief to the world.  And I do believe that baptism, not as a work that we do but a work that God does for us, is that moment when our sins are washed away and we can begin our new life after being buried in water, just as Christ began his new life after being buried in the tomb.

But I’ve heard people start sermons with “If I could only preach one more sermon…” or “If I only had thirty minutes to talk to someone…” and then they follow those statements up with the “Five Steps Of Salvation”.

And here’s why that has started to make me cringe….

1–It’s all about us.  The only time that GOD is usually mentioned in those five steps is when we mention, as a matter of clarification, that Jesus’ burial after the crucifixion was is a type of our burial in baptism.  A sermon on “What Must I Do To Be Saved” usually reads very similar to “How to bake a pie in six easy steps” or “12 weeks to your first 5K run”.  I’m not mocking the truth, but I AM questioning the way it’s sometimes delivered.  And that brings me to #2.

2-Preaching the “5 Steps” doesn’t make the gospel any different from any other religion.  This was pointed out to me recently, and I really see how it’s true.  Christianity is supposed to be about CHRIST.  Hinduism, Islam, Catholicism…They all have one thing in common, they teach all about what YOU HAVE TO DO.  When a non-believer hears the five things they must do to be saved, why should they listen to those five things rather than any other religion’s checklist of things to do?  Which brings up #3.

3-If we preach Jesus, a broken and honest heart will seek out God’s will.  If I had just ONE chance to save someone’s soul, I wouldn’t preach to them that they must hear the word of God.  Instead, I’d let them hear the word of God straight out of my mouth.  We don’t need to be giving people checklists, we need to be breaking their hearts with the story of the cross.  We need to be telling them that God created them and the world for them and has blessed them far beyond what any of us have ever deserved.  And while God was doing all of that, we were rebelling against Him.  We were trampling Him and His word under our feet.  And the whole time that we were doing that we were accumulating a debt that we couldn’t pay.  But rather than hold us responsible for our rebellion, God gave us the exact opposite of what we deserved.  He paid the debt that we couldn’t pay.  And He did that by sending His son to die for us.  God let us murder His son, so that we could live.

And when a heart that’s ready to receive God’s word hears that story, it will break.  And when that heart breaks, nothing in the world can stop it from seeking out God’s will and putting all of their faith in Him.

We don’t need to just be telling people what to do, we need to be telling them WHY to do it.  Because until they hear that story of WHY they should put their faith in God, no one is going to bother doing anything to serve Him.

I’ve heard the story of the Etheopian eunuch in Acts8–That after Philip “preached Jesus”, the eunuch wanted to be baptized.  So….the argument goes that “preaching Jesus” involves “preaching baptism”.  But I think that in an honest hearted zeal to save souls, the cart has been put before the horse in that argument.

Now I think it’s obvious that Philip taught the eunuch about baptism as well because the eunuch, who was apparently ignorant of the gospel, suddenly knew about baptism when they approached water.  But notice how their conversation progressed….  Philip preached the sacrifice of Christ and then baptism, not a five step plan than casually mentioned the cross.

The next time you hear a “5 Step” sermon, or the next time you get the chance to tell someone about Jesus, listen carefully to where the emphasis is….On what we do, or what Christ did for us?

← Dogs are easier to love than people.
What We Say →