Why aren’t our kids being baptized? 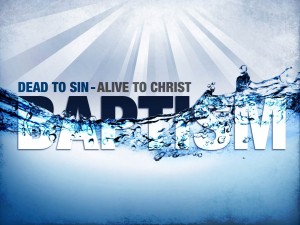 I’m not going to put a date on when someone should be baptized, but rather I’d like to talk about those kids who, in their own minds, believe what the Bible says about their eternal salvation and feel that they’re in need of Christ’s blood but for whatever reason have chosen to not be baptized.

In the Lord’s church and in our homes I think we’re doing a great job of educating our children in Bible knowledge.  They’ve memorized their Sunday School verses, they know the names of the judges and can quote scripture with amazing recollection.  But for some reason there seems to be a steady percentage of our kids that aren’t ever converted, or who aren’t baptized until later in their lives.

And why is that?  I thought it’d be good to talk about three of the more common reasons that I’ve heard from kids as to why they’re not being baptized.

Because their parents want them to.

The “coming of age” that results in a young person’s acknowledgement that they’re in need of Christ’s blood is the same change in their life that causes them to start rebelling against their parents (or any authority figure for that matter).

So in a mad effort to rebel against their parents, kids are refusing to do the one thing that they know their parents want them to do….but won’t ever force them to do.

It’s the perfect rebellion.  Kids know what their parents want them to do more than anything else and know that they’ll never be forced into baptism, so what better way to frustrate mom and dad?

What these kids need to understand is what’s at stake.  Our (their) eternal salvation rests with the blood of Christ.  If they want to be difficult, they can do that with a stupid haircut or annoying music.  But they need to realize that baptism isn’t just “something they do”, it’s the only thing that can wash away their sins and that it’s at the moment of baptism that their new life with Christ starts.

Teenagers are notorious for not taking things seriously enough.  And their Christian life is their choice and their choice alone, but it’s our job to make sure they understand the consequences of those choices they’re making.

Because they’re “not good enough”

This is one of the more common excuses that I’ve heard in the last few years.  I think that is partly because of a culture that we’ve created where kids are encouraged to feel sorry for themselves and given great examples of that by their parents.  But for whatever reason kids today are constantly talking about how they’re “not good enough”.

And it’s good that they don’t feel like they’re good enough.  Someone who says “I’m not good enough” is just the kind of person who will respond to the gospel.  Someone who thinks they ARE good enough is just going to go through life blissfully ignorant of how broken, ugly and sin-sick they are.

The message that we need to be preaching is that none of us are good enough.  If we were good enough we wouldn’t need the blood of Christ at all, we could just march on through life, keeping His commandments with perfection.  But none of us are capable of that, so we need Christ’s sacrifice to redeem our lost souls.

Our kids need to understand that the gospel is FOR people who aren’t good enough.

Because they want to avoid hypocrites

Speaking of families, there’s probably no greater hurdle for young people to overcome than hypocritical parents.  More than any other group of people, parents who don’t walk the talk can push kids away from the church.

And I understand the argument being made, I’ve felt the same discouragement before in not wanting to associate with hypocrites.  But none of the common arguments that I’ve heard before (Better to be surrounded by a few hypocrites in church than a lot of them in Hell) never did much to encourage me.

I think a better approach is to make the argument pretty personal.  What is the kid saying that they hate more than anything else, so much that they’re willing to risk their soul’s salvation on it?  Hypocrisy.  What is hypocrisy?—Not being true to who you really are or pretending to be something you’re not.

Do you believe that Jesus us the son of God?

Do you believe that Jesus came to Earth and died on the cross so that you could be redeemed from your sins?

Do you believe that you need that sacrifice to cleanse you from your sins?

Does that belief and your love for Christ compel you to come in contact with that blood?

If those things are true (and they often are), but you don’t take the actions that your beliefs compel you to…..what are you doing?  You’re pretending to be someone you’re not.  You’re not being true to who you are.  You’re being the very hypocrite that you’re trying to avoid.

My salvation can be helped or hindered by those I surround my self with, especially in my church.  But ultimately my salvation rests entirely with me.  If someone else struggles or falls I should do whatever I can to help them, but the notion that I (or those who refuse Christ’s sacrifice to avoid hypocrisy) should forsake Christ’s sacrifice because of another man’s weakness is crazy.

When John the Baptist saw Christ approaching in John 1 he declared that Jesus was the Lamb of God, who would take away the sin of the world.  We can’t avoid Christ’s sacrifice for any reason and expect to still find salvation.  But I think these three arguments in particular need to be addressed with more of our young people before they become so entrenched in them that we can’t dig them back out.

← Being Right, Gracefully
Four words I’m eliminating from my vocabulary →