The Point Of Beginning

In 1785 Thomas Hutchins, the first ever (and only) Geographer of the United States began a survey of over 1.3 MILLION acres of the American wilderness.  With a sixty-six foot long piece of chain.

To fully appreciate what Hutchins did you’ve got to understand what he did. 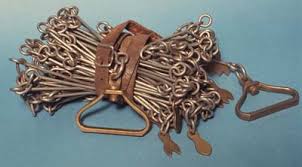 Facing hunger, illness, the weather and constant threat of Indian attacks, Hutchins’ team used chains that were only sixty-six feet long (that had to be kept perfectly straight and level throughout the process) to mark out perfectly straight lines across the wilderness.

To put that in perspective, in major league baseball, first base is ninety feet from home plate.

So for 21 YEARS men walked the distance from home plate to the first base (actually it was 24 feet less than that) over and over and over again in perfectly straight lines for over 19,000 miles (dragging chains the entire way).

Given such  task, where would you even begin?  Well, Thomas Hutchins picked out a spot near what is now East Liverpool, Ohio and determined that it would be his Point Of Beginning.  Today, there’s a roadside marker commemorating the location that the great survey began. 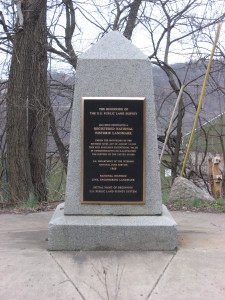 In the face of an absolutely overwhelming task, Hutchins decided to just start it.  He picked out a spot, drove a stake into the ground and got to work.  And he did work on the survey until his death in 1789, seventeen years before the survey was completed.

And I think that what we need are more Points Of Beginning.  When faced with what seem like insurmountable tasks there’s going to come a time when we need to stop procrastinating, stop planning, stop imagining reasons to not start….and go to work.

And Thomas Hutchins has taught me that what I need is not a better understanding of my metabolism, or a better college counselor, or a perfect plan for a Bible study.

What I need is to drive a stake into the ground and go to work.

Because a job that involves dragging chains around the wilderness for 21 years has to start somewhere.  And my job does too.

← What sin did Bruce Jenner commit?
The Importance Of Genesis →