There are few character traits more despised in our society than hypocrisy.  And that Christians are accused of being hypocritical more than any other segment of society.  As a Christian, I think that’s our own fault.

Hypocrisy is obviously condemned in the Bible….
Matthew 23:27-28  Woe to you, scribes and Pharisees, hypocrites! For you are like whitewashed tombs, which outwardly appear beautiful, but within are full of dead people’s bones and all uncleanness. So you also outwardly appear righteous to others, but within you are full of hypocrisy and lawlessness.
1Peter 2:1  So put away all malice and all deceit and hypocrisy and envy and all slander.

The word translated hypocrisy in both of those passages is hypocrisies, which is the word used to describe an actor-someone playing an assumed role.

The word translated as hypocrite in Luke 6:42b, hypokritēs, has the same meaning-an actor, pretender or stage player.  You hypocrite, first take the log out of your own eye, and then you will see clearly to take out the speck that is in your brother’s eye.

I think that often when the world accuses a Christian of being a hypocrite, what they mean is that the Christian is a sinner.  When you put on the name “Christian” and claim to follow Christ, you’re expected to suddenly become infallible.  If you ever sin, ever, then the world claims that you’re a hypocrite.

Why is that?  Why does the world equate “Christian” with “perfect living”?

Maybe it’s because all too often we spend all of our Christian lives trying to out-Christian everyone else in our church, all of our neighbors, and everyone we work with.  The image we try to portray is one of perfection.  Rather than admitting that we’re just as riddled with temptation as everyone else, we hide our sin and “play our assumed role”.  We live out the very definition of hypocrisy every day. 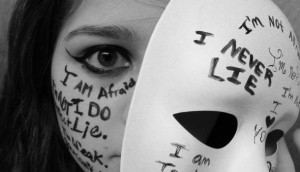 So maybe if Christians are tired of being called hypocrites, they should stop playing the part of something they’re not.

The world is probably labeling Christians as “actors” because they are, they’re trying to convince the world that they’re something other than what they really are.

Rather than pretending to be holy, free from temptation and without sin….Maybe we should let the world know exactly who we are.  We’re broken.  We’re struggling.  We’re completely without hope, save for the hope that we find in the cross.  We’re not free from sin, but we no longer bear the guilt of it.

Rather than making sure the world never sees us sin….Maybe we should be more honest about our struggles with temptation.  And the reason we struggle against sin–Our love for Christ and the sacrifice He made for us.

Then, then, I think we’ll see that the world will stop viewing Christians as hypocrites playing an assumed role on a stage.  Because when a Christians stumbles it will be exactly what they expect.  A broken, sin-sick person struggling with temptation.  But a sin-sick person who is forgiven, full of love and hope for the future.

And that’s when the world will stop calling Christians names for what they do and start asking questions about who they are.