There are a few ideas that I’ve tried to ingrain in the boys from a very young age, one of which is that they should always stick together and take care of each other.  To that end, I created The Rescue Game.

In The Rescue Game, I would sit in the living room floor and the boys would make a loop from the kitchen to the dining room and back to the loving room, trying to run by and attack me.  But if they got too close I would tackle one of them and wrestle them around, playfully roughing them up until BOTH of the other brothers would come “rescue” the victim.  When the victim was fighting back and both brothers were fighting for him, I’d let go and the game would start all over again.

(The game served its purpose….One day the boys were playing in the Chik-Fil-A playground when KicksTheBall got into a little shoving match with another four year old.  From outside the play area I heard PlaysWithFire scream, “Hey!  That’s my brother!!!” and start scrambling down the playscape like an enraged spider monkey.  I got in there just in time to stop all three boys from absolutely trouncing on the unsuspecting bully.)

As the boys got older the game began to escalate and get a little rougher every year.  ReadsTheBooks invented his signature “Flying Knee Kick” which looked like something from an ultimate fighting match and they even began to make detailed plans on how to beat me.

Gone were the days of little squealing tikes giggling as they “fought” with Daddy.  No, now it was war.

The plans became more and more intricate, sometimes involving rope to tie me up or elaborate distractions by a more wary brother while the other two snuck up behind me, or the dreaded double distraction wherein the “distractor” would suddenly turn the tables and become the REAL attacker when I least suspected it.

I knew things had gotten out of hand when the boys almost accidentally murdered me. 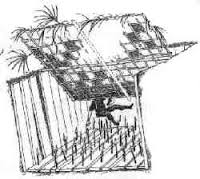 The more seasoned adults reading this will be familiar with punji sticks from the Vietnam War.  Traps were laid with sharpened sticks that soldiers would step or fall onto, causing severe pain and serious injury. 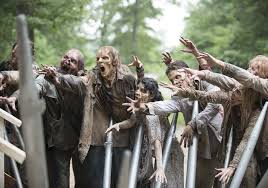 The younger crowd will recognize the concept from shows such as The Walking Dead, where giant sharpened poles will protect you from hoards of the undead.

And apparently even Minecraft is introducing our kids to the concept of inflicting extraordinary pain and misery onto their enemies, with punji sticks being available to turn their creative building blocks into agents of death.

Now my boys have never watched The Walking Dead  and our little rescue game was happening long before they discovered Mine Craft.  But that didn’t stop the boys from nearly killing me with a punji stick.

I realized that our little game was getting out of hand one night several years ago.  Megan and I were smirking back and forth as we listened to the boys in the other room whispering a plan on how to beat me.  KicksTheBall was particularly intent on carrying out something, I didn’t know then what it was, and after a minute of intense planning ReadsTheBooks and PlaysWithFire came around one side of me, obviously trying to distract me as part of their plan.

I played along, reaching out for them but giving them a little room so that they could carry out their plan when I heard KicksTheBall behind me shout, “Alright!  Now!  Go!”  That’s when his two older brothers lunged forward trying to topple me over backwards.

Worried that I was going to fall on KicksTheBall I braced myself before I hit the floor and looked back to make sure he was out of my way.

And that’s when I saw KicksTheBall kneeling down behind me…..With a sharpened pencil braced against the floor and aimed right at my falling back.

Megan panicked, I called a time-out and I had to try to explain the concepts of death and sucking chest wounds to my little warriors.  When I was sure that they understood the seriousness of penetrating chest trauma we played a little more to calm everyone’s nerves and then sent them to bed.

← Dear Mr. President, I know where you can find your god.
It’s only scary because it’s unexpected. →