Is Every Bad Idea A Sin? 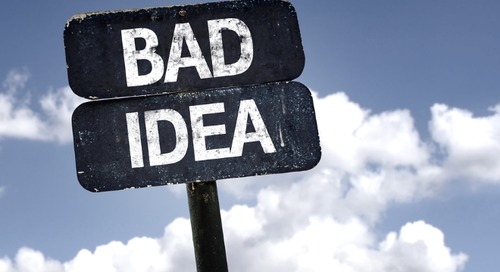 Does it seem to you that there’s a huge problem with Christians today labeling every bad idea as a sin?  Because it does to me.

It’s odd to me, but it seems as though the people who take the most hard-line approach to interpreting scripture and judging their brethren are the same people who are so quick to violate scripture by mis-labeling bad ideas as sin.

For example, let’s take the subject of alcohol.  That’ll be a doosey.

I’ve met Christians who take what I consider to be an extreme position regarding drinking alcoholic beverages.  They not only say that drunkenness is a sin, they say that drinking ANY amount of alcohol is a sin.  The arguments that I’ve heard to justify this stance range from scientific guesses as to how fermented New Testament wine was to misguided uses of modern legal definitions and the idea that drinking alcohol supports an evil industry.

Perhaps what is most disturbing to me is the trend that I see among Christians to “one up” each others’ holiness.  Rather than just standing on the argument that drunkenness is a sin or even their idea that drinking ANY amount of alcohol is a sin, they seem to feel a need to out-holy everyone else.  So they don’t just preach that drinking alcohol is a sin, they preach that being around other people who are drinking alcohol is a sin.  If a co-worker invites everyone to his house and serves beer with the meal, it would be a sin for a Christian to attend, even if he doesn’t drink any alcohol (or at least that’s the argument that I’ve heard).

I’ve eaten with co-workers who served alcohol at their house.  When asked why I didn’t drink I politely replied, “I don’t drink.”  When asked why I don’t drink I’d give an answer along the lines of, “Well, I don’t think it’s a good idea for me.  The Bible preaches against drunkenness and for me that line is a kinda blurry on when ‘drunkenness’ occurs, so I just don’t drink.  And it’d be really hard for me to preach against you drinking a LOT of alcohol while I was drinking a LITTLE, so I just don’t.”  Easy-peasy-nice-n-easy.  And I’ve never been shunned or made fun of.  In fact, I’ve had co-workers specifically not invite me to certain parties and tell me, “Hey, I’m not trying to leave you out.  I just know how you feel about people being drunk.” And they’ve never acted in a raucous manner while I was around.

This isn’t intended to be an essay on alcohol, but if I haven’t become drunk, and I haven’t been a bad influence on those around me, and I’ve done the exact opposite of causing my friends to stumble…..where is the sin?  I’d say that there’s not one.

I believe that the problem that many Christians face is that “bad idea” isn’t in their vocabulary.  Everything is seen as either a sin or not.  And since we’re so scared of Hell, we figure that the safe thing to do is just label anything that might be “iffy” as a sin, even if the Bible doesn’t label it that way.

The response that I’m sure someone is thinking right now, or shouting at their computer screen, is, “Why would a servant of God WANT to engage in ‘iffy’ behavior?”  That’s a good question.  And my answer is that I don’t know.

But I also don’t know why Christians would insist on labeling something that’s clearly not a sin, as a sin.

I have been thoroughly convinced that drinking alcohol is a bad idea for a Christian.  But I’ve never heard a legitimate argument that drinking ANY amount of an alcoholic beverage is a sin.

And it doesn’t just happen with alcohol.  It happens with church attendance all of the time.  I’m reminded of the time a preacher at a gospel meeting said, from the pulpit, that “anything that keeps you from attending every night of this meeting is a sin”.  Well…..(1) That’s not true and (2) Why couldn’t he have just said that it would be a good idea to attend every night of the meeting?  Why did he have to skip straight to the nuclear option?

The answer is because somewhere along the way “bad idea” has been lost from our vocabulary.

There’s an abundance of examples for things I’ve heard to prove this point……Adults watching PG-13 movies, betting lunch on a round of golf, saying “golly”, a song leader not having his songs prepared before services…..The list is endless.

When we lose the ability, or willingness, to just say “I think that’s a bad idea” what we’ve really lost is credibility as people who will speak where the Bible speaks and remain silent where the Bible is silent.

One Comment on “Is Every Bad Idea A Sin?”