If a rainbow adorned White House turned your stomach… 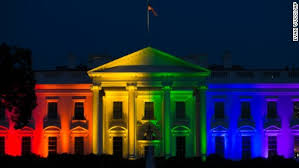 If the rainbow adorned White House turned your stomach, like it did mine, consider this….

When asked if we can expect more equality for gays and lesbians when he’s President, Donald Trump responded, “Well, you can,” Trump responded. “We’re going to bring people together, and that’s your thing, and other people have their thing. We have to bring all people together, and if we don’t we’re not going to have a country anymore. It’s gonna be a total mess. It’s a mess right now. It’s going to be worse.”

Marco Rubio is slightly less accommodating….“I firmly believe the question of same sex marriage is a question of the definition of an institution, not the dignity of a human being. Every American has the right to pursue happiness as they see fit. Not every American has to agree on every issue, but all of us do have to share our country. A large number of Americans will continue to believe in traditional marriage, and a large number of Americans will be pleased with the Court’s decision today. In the years ahead, it is my hope that each side will respect the dignity of the other.”

On the issue of gay rights Ted Cruz compared the radical homosexual agenda as a jihad against Christianity, “We look at the jihad that is being waged right now, in Indiana, and in Arkansas, going after people of faith who respect the biblical teaching that marriage is the union of one man and one woman.”

Regarding the Supreme Court ruling that made gay “marriage” the law in all 50 states…..

Marco Rubio said, “I don’t think the current Constitution gives the federal government the power to regulate marriage……I will appoint Supreme Court justices that will interpret the Constitution as originally constructed.”

Ted Cruz said of the ruling, “I think the decision was fundamentally illegitimate, it was lawless, it was not based on the Constitution.”   Cruz later added that states should ignore the ruling altogether.

Y’all take that for what it’s worth.  But remember that before he was elected, Obama told the American people exactly what kind of President he’d be and was true to his word about it.  Words reveal character.

← What America Wants
The 3 Kinds Of Imperfect People →