I feel bad, but I don’t feel RESPONSIBLE

I think one of the biggest problems with politics today, for the elephants and the donkeys (hahahahahaha….the mascot of the democratic party is a donkey….don’t tell me there’s no truth in advertising!) is that they refuse to acknowledge the difference between feeling BAD about something and feeling RESPONSIBLE for something.

For instance, if I see PlaysWithFire smash his finger in a door I feel really bad that he was hurting, but I wouldn’t feel responsible for his finger hurting.  Simple enough, right?

But it seems like people on both ends of the political spectrum refuse to separate feelings of “bad” and feelings of “responsible”.  It’s either all or nothing, and they’re both wrong.

You see, when a donkey (that still cracks me up) feels bad about something, he immediately feels personally responsible for whatever it is that caused that bad feeling.  When a donkey sees poor people on the street corner, he immediately feels like it’s his personal responsibility to create a welfare program and pay taxes to fund the program and spend time as a volunteer to implement the program….a program designed to raise every poor person on the street out of poverty.

And that’s just not right.  Sure, some people need a helping hand.  Some people just need an opportunity to get back on their feet.  And some people we’re absolutely bound to help….anyone remember the story of the good Samaritan?  But not everybody.

Because some of those people on the street corner need to get punched in the gut and told to go get a job (metaphorically speaking, of course…although a good gut punch can be a wonderful motivator). 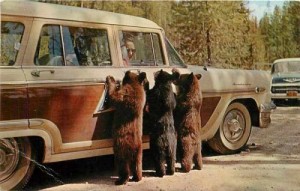 And those people are actually being hurt more than helped by social welfare programs.  Because just like the bear cubs in Yellowstone, they’ll become completely dependent on welfare and handouts to survive.

Surely any honest person can see irony in a government that prohibits feeding wild animals because they will lose their will and ability to provide for themselves, then proposes an $84BILLION (that’s NINE zeroes, people….$84,000,000,000) food stamp budget for 2015.

(Of course, I’d imagine we’d see that rule changed if Congress could figure out a way to let bears vote….)

But honestly, I think the elephants have got it wrong too.

You see, the elephants want so bad to make sure that they’re not seen as being the least bit donkeyish….That they not only don’t feel responsible for the poor guy on the street corner, they don’t feel bad about him either.

Or at least that’s how it’s portrayed.  What I hear from the far right is that every homeless person should just pull themselves up by their bootstraps and make a better life for themselves.  Why, I am a self made man they say….so why can’t every hobo on the street corner be just as successful as me?

(And to be honest, when you say stuff like that you really sound like a donkey.  And not the mascot kind, but a real live actual donkey.)

The elephants have the same problem as the donkeys do about feeling bad and feeling responsible, they just take the extreme position that they’ll feel NEITHER bad nor responsible.

I’ve spent a goodly amount of time dealing with homeless people, face to face, one on one.  I worked for several years in an environment where 97% of my customers were living below the poverty line.  People who were honest to goodness destitute and homeless.  I came to know many of them as lazy bums who just needed to be cut off from the welfare programs that were stifling them.

But I also came to realize that many of those people were homeless for reasons completely independent of them.  I met people who were so mentally ill that their families had abandoned them and they were legitimately unable to keep any sort of job.  I met people with physical disabilities and long-term illnesses that kept them from being able to obtain or keep a job.

And I met quite a few people who were just down on their luck and unable to break out of a cycle of homelessness and unemployment.  Let’s be honest for a minute.  It’s easy to say, “Go get a job.”  But for the guy who lost his job as an unskilled laborer, then couldn’t pay his rent and got evicted from his apartment, and is now living in a tent in the woods…..Or the battered wife who finally got the nerve to leave an abusive relationship, too far from her family who’s too poor to help her anyway, who’s living in her car with her two kids…..How exactly do you propose those people go and get a job?

Would you hire the guy who has no way of showering, getting transportation to work, and smells like he lives under the bridge that he lives under?  Seriously, would you?

Would you hire the single mom who has zero work experience because her abusive husband kept her confined to their home for the last ten years?  The woman with an ex-husband that is keeping the social security card you need for her application?  The woman with an ex-husband who’s sooner or later going to see her car parked in front of your business and start stalking her right up to your business’ front door? The woman who stinks to high heaven because she sleeps in her car, the dumpy car that’ll be parked outside your business 24/7?   Would you?

Those people are real.  And the problem with the elephants is that all too often when we don’t feel personally responsible about something, we turn off that little switch that makes us feel bad about something.

It’s OK to feel bad about those situations.  And it’s OK to feel bad without feeling personally responsible for those situations.  Because that “I feel bad” feeling you get will motivate you to help those people help themselves.  That’s were some social welfare programs can be good.  It can be accomplished through the government (which will surely get it wrong) or private organizations (funded by all the free money I’ll have to donate when the government programs go away).  But to say that ANY program that helps people in need, for any amount of time-no matter how short, is bad….Well that’s just nuts.

As with most things, the solution lies somewhere in the middle.  Thinking that everyone with a job is personally responsible for funding the lives of everyone without a job is insane.  But thinking that “everyone just needs to get a job” and too bad for them if they don’t is just as crazy.