I completely agree with Obama’s foreign policy.  And as a matter of fact, his domestic policy too.

It’s just that I think he should flip them around.

Just hear me out….

What if Obama put as much effort into keeping nukes out of the hands of crazy dictators as he did trying to keep guns out of the hands of law abiding Americans?  Obama has never sat down and had peaceful negotiations in a neutral location with law abiding Americans over gun control.  But that’s what he’s doing with a crazy dictator in Iran over a nuke!!!  When ISIS uses stolen weapons and tanks to murder Christians….nothing.  But when one crazy person in America kills someone with a gun….Obama flips out and demands that people who DIDN’T break the law get punished.

Wouldn’t the world be a safer place if Obama would just take his domestic policy of nobody should have a gun because guns are dangerous and make that his foreign policy?  If he wants to take guns away from people, he could start with the fundamental Islamists that are setting people on fire and killing children with the guns we sent to that desert to begin with.

My goodness, even if you want to let ISIS kill Christians….At least don’t let them do it with our guns!!!

Look at what all is wrong in the world that Obama ignores…..  Again-ISIS.  Duh.  That’s a pretty big one.  Obama planned on defeating ISIS by training Syrians to fight their own war.  The plan was to train 5,000 Syrians every year for three years.  This year we had 60 people show up for training.  SIXTY PEOPLE to defeat ISIS.

To be clear, ISIS setting people on fire and killing children and Christians gets a response of 60 people.  Investigating a cop in Ferguson who (by their own admission) did nothing wrong gets the attention of 40 federal investigators.  Which demonstrates perfectly how our president insists on focusing all of his attention on all of the wrong things.

Obama managed to ignore the memorial service for twelve innocent people murdered in France by Islamic terrorists, a memorial service attended by leaders from Britain, Germany, Spain, Palestine and Israel.  When the eyes of the world were watching, Obama fumbled the ball.  Again. 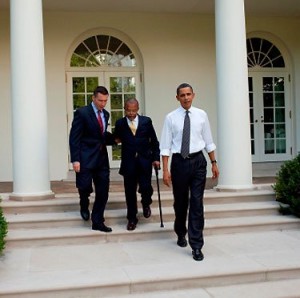 But does everybody remember the “beer summit” of 2009?  Obama couldn’t help but interject himself into a situation that was, at worst, a collision of two idiots trying to occupy the same place at the same time.  This picture was taken just after the beer summit….In the background you can see the racist cop who was accused by the president of racially profiling the elderly black man, who he’s assisting down the stairs, as Obama ignores them both.

So yes, I completely agree with Obama’s domestic policy of “try to protect everyone from everything for forever”.  I just wish he’d apply it to bad things happening in other places and try to protect people getting thrown off of buildings by ISIS.  And I wish he cared as much about Iran building a nuke as he did about the gun my mother uses to protect her home.

And yes, I completely agree with Obama’s foreign policy of “do nothing and hope nobody notices”.  I just wish he’d apply that domestically.  Because honestly, we really don’t need all of the baby-mama-type-drama that Obama has brought to our country in the last eight years.

← Repost from Seth Godin: The Rejectionists
Dear America, this sign won’t save you…. →