So normally when I need a new pair of socks or underoos I just mention it to the wifey and she takes care of that sort of thing for me. But recently we stopped at Target to get the boys some new clothes and I told myself, “Self, why don’t you just mosey on over to the unmentionables section and pick up some new unmentionables so your pretty bride doesn’t have to do it for you?”

So I did. I mosey’d on over to the unmentionables section for guys….or so I thought….

My first point of consternation was when I thought I was turned around because the fellas underwear was right across from the girls pants. Huh, that’s not normal…Did I somehow wander into the generic everything-that’s-on-sale section?  A quick look up at the sign verified that I was indeed in the dude department. I cautiously (making sure no one was looking in case the giant “DUDE SECTION” sign above me was mistaken) inspected the girls pants that were crowding every rack in the mens department. And you know what I found? Skinny jeans, that’s what I found!!!

Now I’ve never been closer to skinny jeans for dudes than as I drive past a hippie-hipster on the sidewalk downtown and guys, I was a bit taken aback. They’re just like girl pants! Just exactly the same! Which figures, because I’ve never suspected the “dudes” wearing them needed much in the way of manly support anyway, if you catch my drift.

I didn’t know what to do. I felt the urge to cleanse myself of what I had just touched. But how? I couldn’t bring myself to wipe my hands on my pants and possibly contaminate my own manhood with such nonsense. I settled for a shiver and walked away.

Now like I said, I’ve haven’t purchased my own underwear in years. I can’t remember when I did last, actually. So I wasn’t exactly sure what I was looking for. My chiseled chest and ripped abs looked exactly like the model on each of the packages, so the pictures weren’t gonna help me narrow it down.

Thinking back over my underwear experiences in my travels thus far today I decided that whatever I was wearing at the moment would surely suffice for any future endeavors. So, another quick look around ensured no one was watching and I just took a quick peek to see exactly what I was wearing “down there”. I couldn’t read the label, but the logo matched a nearby rack so that’s where I headed.

Before I get into the worst of it, let me point out that the sheer volume of options was overwhelming. I needed short black socks for work. I found short black socks. Socks designed for moisture wicking, for extra cushion, extra support and socks with flat seams (whatever that is). The last time I bought socks you could buy short or tall, that was it. Now there’s “no show”, “mid cut” and “ankle”. I figured “mid” sounded like middle and I’m a middle of the road kinda guy when it comes to my undergarments so I snatched those off the rack just to end the whole experience. And I don’t know how yall are built around your middle parts, but I’m a pretty regular sized feller. I wear 34-34 pants, size large shirts and am at peace with the world. But I swear the only sizes of underwear made nowadays are XXL and small, or at least that’s all that’re stocked where I was at. I’d probably have trouble stuffing all the extra material from the XXLs into my britches and there’s no way my finely shaped glutes would manage into a size small. I spend more time digging through the rack for a package of mediums than the goobers on Alaska Gold Rush did looking for gold in their first seven episodes, but unlike they….I succeeded.

By the time I was done picking up TWO ITEMS I was mentally and emotionally exhausted. I wasn’t sure how much more shopping my poor soul could take when all of a sudden, from out of nowhere, it hit me. I suppose I had overlooked it because of my skinny jean induced tunnel vision, but as I thought my crisis was over the fog began to clear and I took a good look around. And do you know what I saw? I’ll tell you what I saw.  I saw racks and racks full of PINK dudes underwear.

My head was reeling, I couldn’t breathe. All the news articles about what bad shape our country was in, that I had scoffed at and openly ridiculed, came flooding back to me. My goodness, what could this mean? If a regular store sold PINK dude underwear, what else was going on that I didn’t know about? Flouride in our water, FEMA concentration camps, fake birth certificates….it all became so confusing.

My reality was crumbling right before me. I stumbled away, gasping for air so that I could cry out for help. If only I could get Megan over to me, my beautiful, sexy wife-I knew she could help. Surely she’d seen this before and shielded me from it….she always knew what was best….she’d know what to do. In the least, I’d hopefully stumble into her and “accidentally” catch myself on her bosom, sending a surge of much needed testosterone through my system.

As I lurched out of the so-called-mens-department I stupidly looked to the right. Why had I been so stupid? I should’ve just stared at the floor. What I saw wasn’t as frightening as PINK dudes underwear, but was disturbing on a whole new level. I had found myself in another part of the obviously over stocked sock section and through the haze that was my new consciousness I saw the most bizarre socks I’d every seen. Socks with colors and pictures….bananas, cheeseburgers, robots, stripes and sharks. Not in the little boys section. These were full size, regular length socks. My first question was what kinda self respecting grown man would wear rainbow striped socks? Then it hit me…the same kinda grown man who would wear PINK underwear, that’s who!

After finding my family I told them what all had just happened. Megan snickered and gave me that look that she often does that I’ve never exactly pinned down the meaning of, but my boys couldn’t believe it. Of course they couldn’t, they have me for a dad. A man’s man. The kinda guy that puts the Magnum in Magnum P.I.  I summoned up all my courage and led my troops straight through Hell’s front door and into Satan’s Lair. I pointed out the nonsense, the travesty, the abomination to my little men and I was proud to see they shared my disgust.

Now I’m sure there are some reading this that just can’t believe it’s true. Poor, innocent creatures who are still blissfully ignorant…just as I was five hours ago. But friends, it’s true. And we need to know the truth. We CAN handle the truth! So take a seat, take a deep breath, and scroll down further…..if you dare…. 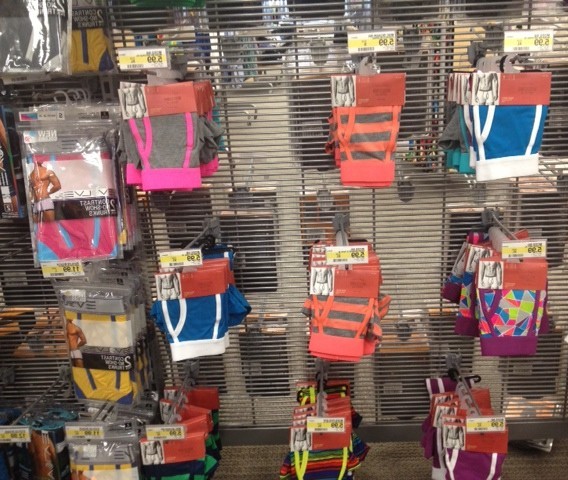