In case it wasn’t already crystal clear to you….This sign won’t save you.

Yesterday in Chattanooga there was a piece of glass full of bullet holes.

On the other side of that glass were brave men who had sworn an oath to defend our country against terrorists like the man outside.  Brave men who were specifically trained to deal with the terrorist outside, but were unable to.  Those brave men had devoted their lives to defending the defenseless, but at that very moment had become the defenseless themselves.

Why?  Why were those brave military men defenseless?  Why were the people best trained to deal with a terrorist so helpless?

Why?  Because the good guys didn’t have a gun. 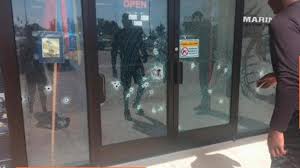 America, every time the government wants to pass a new law that restricts your ability to protect yourself with a gun I want you to remember this picture.

← I completely agree with Obama’s foreign policy….
Dear Mr. President, THE FAMILY is the answer you’re looking for…. →