When we discuss addiction, it is critical that we understand just how dangerous addiction can be to a Christian’s soul.

I believe that addiction, in any form, is wrong.

Because addiction is essentially idolatry.  Idolatry is putting your faith in something other than God.  When the Israelites made the golden calf at the foot of Mt. Sinai, they proclaimed that the calf (that they had just created) was what had led them out of Egypt.  They put their faith in the creation, rather than the Creator.

And when we give in to addiction, when we choose to find our happiness and satisfaction in drugs or alcohol or nicotine, or anything else, we’ve given up on God.  We’ve put our faith and hope in the creation rather than the Creator.

Just like the Israelites at Mt. Sinai we’re proclaiming that “this thing” is what will lead us and protect us and satisfy us.

Addiction isn’t the same for everyone, because of genetic and environmental factors some people are predisposed to addiction.  And that’s one of the things that can make it so dangerous for young people.  When they don’t realize how their brains work, and when those brains aren’t fully developed, and when they haven’t fully developed their impulse control, they are especially susceptible to addiction.

One exposure to some substances or activities can be enough to start the spiral of addiction.  And once you’re addicted, it will be a constant battle (physical, emotional and spiritual) to overcome that addiction.

Christians need to realize that addiction DOES affect their relationship with God.  And I’m not talking about the physical temptations that are involved with addiction.  Remember what we said about repentance?  Repentance is a determination, a resolve, to serve God.  And addiction is the polar opposite of that.  Addiction strips you of all of your hope and your faith that you can win.  Addiction is despair.  And despair will kill your faith.

When you don’t believe that you can ever get better, you’ll never have that determination to serve God that IS repentance.

Running a marathon (26.2 miles) seems to me to be a nearly unconquerable task.  Given enough time and encouragement and help though, I could resolve to run a marathon.  I’m sure that the journey to a 26.2 mile race would be difficult and I would have setbacks along the way, but I believe I could do it.

That despair is what is so dangerous about addiction.

When a person doesn’t believe that they’ll ever be able to overcome their addiction, they’ll never resolve to try.  And that resolve to try, the decision that you want to serve God and find your happiness and satisfaction and hope in Him, is what can make the difference between spiritual life and death. 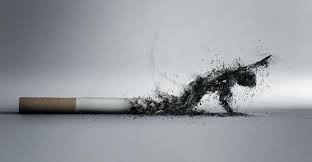 Nicotine and other addictive drugs aren’t just a path toward addiction, They’re a running leap toward addiction.  And anyone interested in preserving their souls and guarding themselves against despair and idolatry will acknowledge that.

I’m not speaking against cigarettes in particular.  I don’t think that smoking A cigarette endangers your soul.  I think that ingesting a chemical that you know can be so addictive, and knowing how dangerous addiction can be, is a really stupid idea.  (The problem that I see is that too many people aren’t willing to acknowledge the difference between something being a bad idea and it being a sin…We’re preaching against the symptom rather than the disease.)

And that leads us into what we’ll talk about tomorrow….What a Christian’s attitude toward addiction and addicts should be.